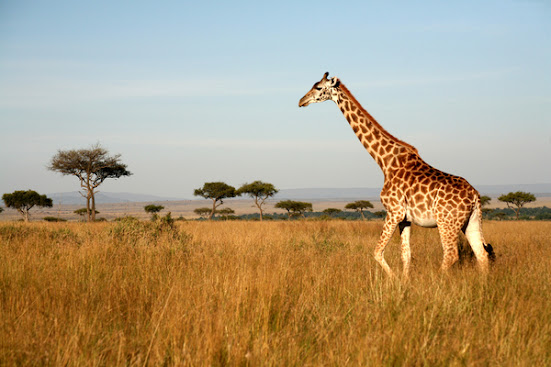 Giraffes are one of Africa's most famous animals. They are classified into nine subspecies based on where they may be found in Africa and the colour of their bodies. Giraffes are the world's tallest animals, inhabiting savannas, the Sahel, and open wooded regions.

Facts about giraffes that you should know:

Giraffes have such a large tongue that they can lick their whole face, including their ears.

Giraffes only sleep for around two hours each day.

Acacia is a giraffe's favorite meal. Mimosa leaves and apricots are other favorites.

Because the inside surface of an animal's mouth is hard, they can consume prickly vegetation without harming themselves.

Giraffes don't consume nearly as much water as camels and can go longer without water.

Because their necks are shorter than their front limbs, they must extend their feet to reach the water's surface while drinking. This position is hazardous because the giraffe loses its balance, is unable to detect creeping predators, and is unable to attain the speed required to flee the danger.

Their hearts may measure up to 2 feet in length and weigh up to 20 pounds. Every minute, this big and powerful heart pumps 75 liters of blood.

Because of their height and heart size, giraffes have one of the highest blood pressures in the animal world.

Every giraffe has a unique pattern of spots. Researchers can distinguish between giraffes by looking at their distinct spot patterns.

Giraffes have seven vertebrae in their necks, much like humans, although theirs are considerably larger (one vertebra has 5 inches).

A young giraffe's life starts when it falls from a height of 6 feet to the earth.

The majority of giraffes have 2-4 horns on their heads.

Giraffes can run at speeds of up to 35 mph over short distances.

Giraffes live for around 25 years in captivity and 10-15 years in the wild.