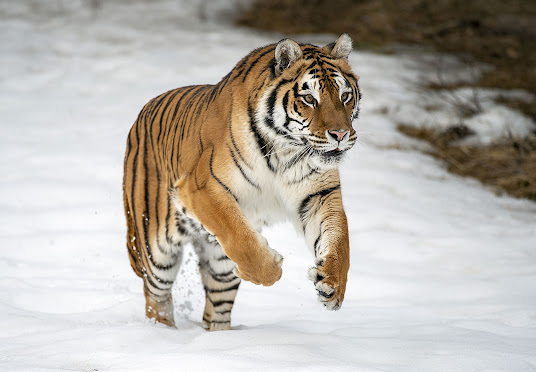 Tigers are the world's largest cats. They can thrive in a broad variety of Asian and Russian climates, including tropical rainforests, savannas, and Siberian woods. Tigers are divided into five subspecies. Only 7400 tigers remain in the wild, making them all extremely endangered. Poaching (they are poached for their fur) and habitat degradation have severely reduced their numbers. Tigers are kept as pets by certain individuals. The number of tigers kept as pets in the United States exceeds the number of wild tigers.

Tigers are colossal felines. The Siberian tiger is the most massive of all the subspecies. It is 11 feet long and weighs up to 660 pounds. The long tail of a tiger helps balance and may also be utilized to communicate.

The stripes on tigers are the most well-known feature. They have about 100 stripes that are individually positioned and utilized to identify tigers (just like our fingerprints). Camouflage is provided by stripes.

White tigers are a rare kind of tiger that may be seen in the wild. These tigers have blue eyes and white fur with stripes.

Tigers are solitary creatures that like to be alone. They only get together during the mating season. A "streak" of tigers is an uncommon occurrence in which a group of tigers forms.

They are territorial creatures, meaning they want a certain area of the wild to themselves. Depending on the tiger species, the area varies from 10 to 30 square miles, but it may be considerably bigger - up to 120 square miles - in certain instances.

A combination of urine and fluids from a gland with a strong odor will be used by Tiger to mark his territory. Other tigers will be aware that the area has been claimed.

Tigers have big paws with sharp claws that retract (they can hide their claws). They use them to hunt and kill prey, as well as to fight other tigers. Pug mark refers to a tiger's paw print.

Large animals, such as wild boars and deer, are often eaten by tigers. They may also attack and kill pythons, crocodiles, and even bears.

Tigers are ambush predators, meaning they will capture their victim by surprise.

Tigers have great swimming abilities. With a prey in their jaws, they can swim 4 kilometers.

The female tiger is known as a tigress. tigress is ready to become a mother for the first time at the age of three and a half years. She typically has three to four cubs. Despite her protective nature, half of her cubs will be murdered by predators or male tigers, or may starve to death due to a lack of food.

Only a small percentage of cubs that survive will leave their mother at the age of two and begin a life on their own.

Tigers have exceptional visual acuity. At night, they can see six times better than humans. They have excellent hearing and emit roars that are particularly loud and distinctive during mating season. They're audible from a mile away.

Tigers are fast-moving creatures. They have a top speed of 35-40 miles per hour. They're also excellent jumpers, capable of leaping up to 10 meters.