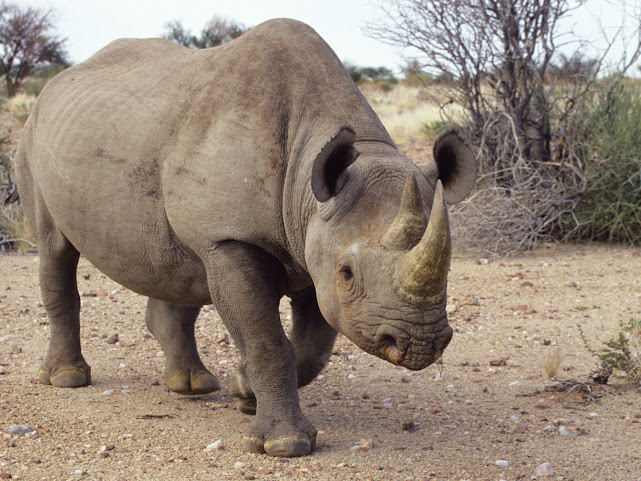 Rhinoceros (or rhino) is the world's second-largest land animal (elephant is the largest). Africa and Asia are home to these creatures. Rhinos come in five different kinds, all of which are endangered due to overhunting. Rhinos are being killed for their horns by poachers.

Rhinos may grow to be 6 feet tall, 11 feet long, and weigh up to 6000 pounds. Despite its enormous size, it possesses a tiny brain.

In Africa, there are two kinds of rhinos: white and black. The white rhino isn't really white. In comparison to black rhinos, it has brownish skin and a larger mouth.

The Javan rhinoceros is the most endangered of all rhinoceros species. There are just 50 creatures remaining in the wild. This species seems to have thick plates covering its body. The plates on the skin are really folds.

Their skin is thick, yet it is delicate and susceptible to sunburn. Rhinos coat their bodies with mud to form a protective covering. Mud also protects them from insects.

Rhinoceros are herbivores (eat only plants). Grass, bushes, leaves, and shoots are among their favorite foods.

Rhinoa horns are formed of the same material (keratin) as human nails are composed of.

The longest horn measured 4 feet and 9 inches in length.

Ticks and other insects are removed off the skin of rhinos by little birds known as oxpeckers.

The rhinoceros is a fast-moving mammal. It has a top speed of 40 miles per hour.

Rhinos have weak vision, but they have great hearing and smell.

A crash is a group of rhinoceros. Black rhinos often engage in combat with one another. The battle claims the lives of 50 percent of men and 30 percent of girls.

Pregnancy lasts 14 to 18 months, and the mother takes excellent care of her child. After 2-4 years, a young rhino will leave its mother.