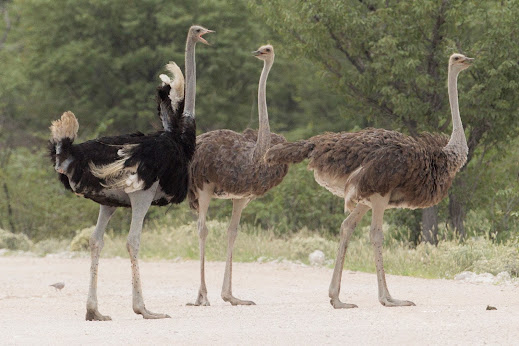 Ostriches are non-flying, big birds native to Africa. Ostriches are often bred as farm animals outside of their native habitat because some people like eating their meat, eggs, or wearing fashion items made of their skin. They are not endangered, despite the fact that they are slaughtered for economic reasons. Ostriches number about 2 million and may be found all over the world.

Colors vary between males, females, and young ostriches. Males are distinguished by their black and white coloring. Females and their young are often grey, brownish, or white in color.

Ostriches can go for extended periods of time without drinking. Water will be absorbed from the food they consume.

Ostriches are the fastest flying birds in the planet. They have the ability to sprint faster than lions or leopards.

Ostriches are devoid of a breastbone.

Ostriches have just two toes, unlike other birds.

They have very powerful legs. A lion may be killed with a single kick.

The ostrich possesses the largest eyes of any animal in the planet. It has a larger eye than it has a brain.

The ostrich does not bury its head in the sand. If they detect danger, they will rest their heads on the ground. The head's hue mixes in with the ground, giving the impression that it is buried in the sand.

Adult ostriches have a strong immune system, therefore they don't get ill easily.

The ostrich is the world's largest and heaviest bird. They lay enormous eggs. One egg is the equivalent of 24 chicken eggs. A single ostrich egg takes 2 hours to cook.

Even if her eggs are jumbled up with other eggs, the female can identify her own.

Ostriches are irritable. If two families (adults with children) meet in the wild, a battle will ensue. The children of the losing couple will be taken over by the winners.

Ostriches are a very ancient species of bird. They have been on the planet for about 120 million years.

Ostriches may live up to 70 years in captivity.